Christmas Recorder Ensemble
The ERS is not participating at the Legislature Building this year.

. A 45-minute Christmas programme is being planned
for a care facility in December, date and location TBA.
You are welcome to participate, either by playing a piece of
music or participating in an ensemble. The programme is open to any Christmas-appropriate selection you’d like to play
for recorder and/or other instruments, or sing.
We’d like to put together a lovely, varied music programme
with wide participation similar to the Alberta Legislature
​programmes we’ve done in past years. 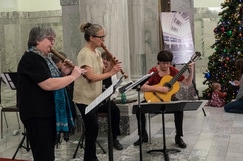 About ﻿Celebrate the Season:   Here's an excerpt from the Alberta Legislature Visitor Services website:    DECEMBER 2 to 23, 2016    For over 30 years [we have] celebrated the holiday season with musical performances throughout December. Nearly 70 musical ensembles from throughout the province will grace the Legislature rotunda's grand staircase with daily performances during Celebrate the Season.
Lights:  Thousands of bright lights provide the perfect backdrop for a holiday stroll on the beautiful Legislature Grounds. The centrepiece tree is a 60-foot spruce originating from the Edson area and is lit with over 5,000 lights of its own

2015   Celebrate the Season
Mini Concert on the Legislature Grounds: Federal Building
Wednesday, December 9, 2015     6:30 pm
This third year of our participation and we were delighted to have a guest soprano and cellist.   Another number included guitar and, of course, several seasonal numbers with recorders only.  Many thanks to our participants and audience. 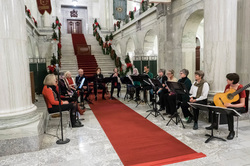 This was the second year that we participated in Celebrate the Season, a series of choir and music performances at noon and early evening throughout December in the Rotunda at the Legislative Buildings.    What a grand hall in which to play early music!  Our Christmas pieces rang out to complement the visual display of poinsettias and colourfully lit tree.  The warm weather encouraged a good number of citizens to check us out, as did a couple of prominent politicians.    Sixteen players, representing various permutations of five small ensembles*, played everything from Byrd to Bach, Corelli, Holst and Guaraldi.
*  Quattro/Trio Corelli, Lori and Alena, The Three Tooters, Suite Tweet, The Fipple Sounds