Main Hall upstairs.  10139 - 87 Avenue
Face coverings requested.  Free Admission.
Our ensemble will play - you can, too!  Play-in!
Take your instruments and a music stand
For the first time ever at our Gala, you, as a member of our audience, are invited to join us in a play-in sight reading session. Music will be provided, but if you have any scores that you would like played (or attempted to be played!) please bring them along in addition to your recorders or any other instruments that you wish to play. All of this, of course, is optional to you. You are free to sit, listen and enjoy.

​Performances 2022
Gala performances this year will be given in a less formal atmosphere than previously. Performers include our ERS Ensemble, other members of the society in smaller configurations as well as some student performances.

Covid Precautions 2022 Spring
While the worst of the pandemic is over, we are still living with the reality of Covid19. We still need to be cautious and therefore request that masks be required for all in attendance, (except to play our recorders!). Let us have a safe event. 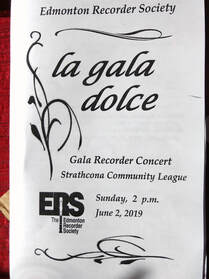 Christmas Performances
For two or three years, the ERS participated in the December Program at the Legislature Building.   Recently, we switched to performances at senior care facilities